Thankfully our love outlasts our cars

Got the ’62 Bug about the time we started
Dating. Used graduation money and some
savings, $400 total. Two years, trips
over the mountains to see you and a rebuilt
engine later I bought the ’68 Opal Kadet,
powder blue. Carried us away on our
wedding day. Not a bad car, unless you
wanted heat. First new car was the ’75 Civic.
Made us feel so grown up. We traded it for a
Honda wagon, four doors and hopes to need
the extra space for kids. Soon added the Datsun
pick-up for daily commutes, me north, you east.
Basically a headache. Next the silver Accord,
the fastback. You kindly gave into my dream that
became a nightmare, worse than the
Datsun. Kyle was about 6 months when it broke
down in Everett on our way home from your
Grandfather’s Memorial service. Bob was with
us. I think of it every time I drive by the
restaurant, now a casino, that we went to to
find a phone. Michael arrived and so did
the Ford (Why a Ford?) Escort. Four-door
hatchback, Fawn was the official color. More
like blah. Next came the Colt Vista, seven
seats, but not a mini-van. My ego could not handle
a mini-van. Unnumbered trips up and down I-5 for
family visits and vacations with the boys. Got a
used Honda for a second car. This led to learning
emerald black is not black. Became Kyle’s car
and eventually died somewhere in Oregon. Bought
the Rav in ’97. That brutal year that included my
Dad dying of lung cancer. When the Colt ceased
operation, somewhere between home and Mt. Baker,
I got the ‘95 Tacoma. Traded the Rav for a
Highlander, ’08. 0% interest loan with room for
camping gear and grandkids. On an unseasonably
hot day, before a June wedding, Kyle helped me
pick out the Mazda 3 (0%, again). Velocity Red,
6 speed, quick and agile. Seemingly the perfect car
as we, yet again, entered an era of unexpected life
shifts and possibilities. 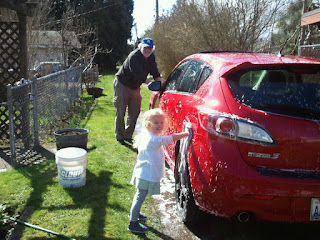 Read more here: http://www.bellinghamherald.com/news/local/article59897131.html#storylink=cpy
Posted by jim schmotzer at 8:10 AM No comments: