Nod to the boys of Stephens Street

Doug was born 12.12.53
making him the first
to cross the imaginary line.
The rest of us were ’54.
I think I’m next.
Mid-march, eighteenth to be exact,
about two weeks before Steve.
Denny follows on April fifth.
Donnie may have been the youngest,
maybe a summer birthday.

And Lee Ann, she was the only girl,
and I don’t remember her DOB.
Posted by jim schmotzer at 8:11 AM No comments:

My heart can be pulled and tears called forth in numerous settings. Books, movies, songs and, I might as well admit, TV shows and commercials can all overwhelm me. A heartfelt conversation, whether with a friend or someone I have just met, can lead to a place of wonder.
I’m drawn in and it happens. Something whispers of something deeper: life as I hope and dream it could or should be; forgiveness, grace, reconciliation, second chances, unbelievable tenacity and peace; taste of the holy, of something more.
I think I’ve always had a sensitive side and I think it may be growing in intensity with age. Maybe I am more aware of it and have no interest in holding it back.
In 1981 I was in my twenties and I ran a marathon, which was a big deal for me. It was the accomplishment of something that I thought impossible. I trained, registered and ran. As I neared the finish line I had a sense of being overwhelmed. Satisfaction, joy and contentment filled me. I felt I was about to cry, but I told myself, “Not now. If you cry, they (family and friends waiting for me) will think something’s wrong. But I’m okay, I can’t cry now, I’ll do it later.”
Later never came and that cry never happened. That memory has been my rallying point for trying to be better about living in the moment and accepting opportunities when they present themselves.
For almost a decade I’ve shared season tickets to Seattle Seahawks games with my youngest son. As with most things I tend to overanalyze this.  It costs money, it takes time (we live about 100 miles from the stadium) and it impacts other family schedules. I, also, have cautions about the world of football. It’s violent and I’m doing my best to be a pacifist. There are the current concerns about concussions and questions related to the very survival of the sport in the future. There are issues of money: young men making more money than they will ever need at a time in life when they have limited skills to manage the trust. The flow of cash for tickets and concessions added to advertising dollars can produce budget numbers beyond my imagination.
But then it happens. Another game day arrives. We have our rituals. We make the drive listening to the sports talk guys while having our own conversation about the impending rivalry. We park in the same area and take the same walk to the stadium, buy (usually) the same lunch, enjoy the same pre-game activities and eventually make our way to our seats.
We arrive 20 to 30 minutes before kick-off. We do not want to miss the pre-game happenings each week with few changes. The flag and national anthem are the first to get me choked up. And let’s be honest, I have deeply conflicted thoughts about Americanism, patriotism and the like. But it still gets me. Next the players are introduced. The crowd is driven to a frenzy. Another reality check: I hate hype and am known for my skepticism and unwillingness to “drink the Kool-Aid.” But I’m barely able to keep from losing it, always tearing up.
There is something in the moment, in being with my son, our neighbors (Jordan, George, Sam and the others we have shared a row of seats with for all these years, and would have otherwise never known) and the entire crowd. We are about to will “our” team to win. And it is only our team because of geography and choice. And they deserve to win more than the other team because they are our team. I know this is illogical, and it doesn’t matter.
Kick-off happens and the next three hours are the proverbial emotional roller coaster. If our team is doing well we scream, laugh, high-five, hug and dance (at times with people we have never met and will never see again). When our team struggles we try to motivate them, lift them to doing better. If the wheels come off we may drop to our seats in despair, 70,000 people each praying in their own gut-wrenching way.
One team is doing all it can to make something happen while the opposition has marshaled all its resources to stop their opponents. And in each play, each moment there is the possibility of the beauty of seeing our team overcome the odds and complete the pass or force the pick six (it’s an offense or defense thing).
It’s a game, it’s frivolous and it’s unnecessary.  Yet it can provide an emotional rush that can’t be forced or simulated. It is real and in the moment. You are either there or you’re not. While in reality we are nothing more than spectators, somehow in the flash of action and crowd, we are alive and sharing in the experience and it is beautifully overwhelming.
May God have mercy on us all. 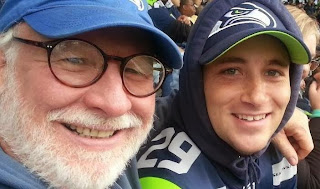 Posted by jim schmotzer at 9:24 PM No comments: