There’s danger in heeding the demand to “just say no!”
Christians (you know, “those Christians”) love jumping on various bandwagons that affirm their convictions and prove that their clan is the right one.
The convictions generally tell us the world is bad, we are bad and they are bad. Essentially everything is bad. If we buy in, we (oops, I just lumped myself in with “them”) see so much evil it is amazing anyone gets out of bed in the morning and risks a breath. We love evidence that our list of “forbiddens” is the correct one. And we love any time the beast of culture sees the light, and agrees with us.
The problem is that our lists are usually a muddled mix of fears, discomforts and leftover things we were taught or assumed. Seems the more conservative (I know it’s a loaded word, but what else works?), the longer the list.  Or maybe not.
My faith roots are deeply embedded in fundamentalism with its rules and prohibitions. In my adult years, I have had associations that allow me to drift across much, if not most, of the spectrum of American Christianity.  Interestingly, I have discovered that in addition to fundamentalist conservatives, there are fundamentalist liberals who can have similarly deep prejudices.  The trick is that they are often more educated and culturally savvy at disguising their prejudices.  Liberals have their revised lists of evils — you know, like never voting Republican, or shopping at Wal-Mart, or avoiding TV (except PBS) and radio (except NPR), or enlarging their carbon footprint, and so on. The hate toward conservatives is another place that liberals show their true colors. For all of their so-called open-mindedness and inclusivity, they can be vicious in their assessment of conservatives (without any honest conversation along the way).
I agree that we all need to have self-control, healthy limits and reasonable boundaries. But I fear for anyone (especially me) who lives life focused on the negative. Even worse would be the life of anyone who focuses on judging the negative for others. In the name of religious purity many have missed the joy of life. Art, adventure, medicine, movies, alcohol, sex and learning have all been on someone’s bad list. And the faithful have lined up to please prophets and preachers by adopting strict lives of self-denial.
I understand that as a child I needed to learn not to run in front of cars or put my hand on the stovetop (learned this one the hard way). It takes structure to find our way in this world. But at some point we need to cross the line, become adult and start living in the dangerous world where all is possible.  It’s a tough challenge, but it’s also a great adventure. I don’t need to walk a wire over Niagara Falls for an adrenaline rush. The very refusal to be guided and defined by simplistic rules and prohibitions is a risk many shy away from.
My best shot is this: if your convictions are primarily negative, you’re living a sad life. If your convictions are summed up by “supposed to,” “should” and “have to,” you’re living a sad life. If you are focused on pleasing others, you’re living a sad life. If you are driven by a list that you can’t explain or don’t understand, you’re living a sad life. If you are great at boundaries and saying “no,” but it is actually rooted in selfishness, you’re living a sad life.
Somehow we need to make peace with ourselves, this world, our faith and God. Negatives may provide a base for beginning, but life is lived in the possibilities — the messy, dangerous, beautiful, wonderful, complicated, scary, confusing and soul-feeding possibilities.
Lord, have mercy (and help me to live mercifully).

Posted by jim schmotzer at 6:50 AM No comments: 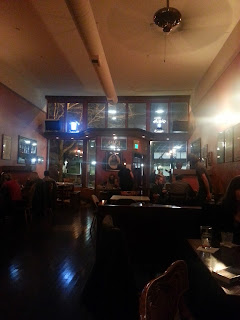