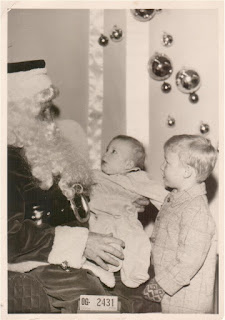 1957. First Christmas with my baby brother (John). Peace to all today and each new day!

Jim
Posted by jim schmotzer at 3:37 PM No comments:

This morning we sit in our
Family room by our tree heavy
With thirty-nine years of memories
We decorated on Friday,
Yes, that Friday
The only day and only time
We could get together,
Go to the nearest lot
Because we couldn’t pull off
A trip to the tree farm
To cut a “real” one,
We watch the news
Resift the details
The impossible
So simply repeated
And it appears that
We will keep talking, posturing
And arguing
But actually doing little,
If nothing,
To see that it doesn’t
Happen again
Posted by jim schmotzer at 9:39 AM 2 comments:

Yes, I still take the daily paper. Other than the physical shifts in my body, this may be the truest sign of my drifting toward extinction (more specifically, being old).
It seems ridiculous that I still subscribe. I spend most days hovering near some type of Internet-connected screen and frequently look at numerous news sites. By the time the actual paper arrives I’ve already caught the news, many times over.
I wonder what will finally force me to end my daily practice: economics (why pay for it when it’s free online?), environmental concerns (do we need to be using paper this way?) or technology (they go under and stop printing!).
In recent years our local paper has been sold from one mega-corporation to another, been through numerous shifts in executive and editorial leadership and shrunk in size. All of this, along with staff reductions and moving printing services out of town, can be viewed as last-ditch attempts at life support for the industry.
So why do I still take the local paper? It may be little more than sentiment and habit, but it is real. Here’s something of an overview of my “relationship” with newspapers.

(I’m old, but this part is before I was born.) My dad sets the table: it’s in our blood and bones. I remember him telling stories of selling papers on the streets of Portland during the Big One, WWII. He’d rush downtown after school, or skip school altogether, to pick up his papers. Then he would hustle to get a good corner and shout the day’s war reports of troop movements and lives lost trying to sell his stack, fill his pockets with a few coins and be off for fun with friends before the rain overwhelmed the day.

I got a weekly suburban neighborhood route as soon as I was deemed old enough. There is a family story of how I was tricked into getting a route when I got a new bike for Christmas. I initially made something like six or seven dollars a month and some tips, if lucky. After a few years I got a daily route, a Journal route making about 15 bucks a month.
The (Oregon) Journal was the afternoon paper in Portland. It had something of a reputation for being the choice of the blue-collar strata. The Oregonian was the morning rag of the elitist white-collar segment. Our family always took The Journal, until it was absorbed into The Oregonian.
The paper routes were my first source of earned money. I bought model cars and record albums. I opened a bank account and bought ice cream sodas at the drug store counter. I went to movies and spent summer days at the county fair, all funded, at least in part, by paper route money.
I guess I delivered papers from about age 12 until 16. Being a paperboy (“boy” was the term in that era) in Portland took commitment. The paper had to be delivered in a small time window and the legendary rain was no respecter of my childhood comforts. I’d stuff papers in my canvas bag and take off walking or on my bike. The trick was to get the papers delivered before the rain soaked through the bag, doubling its weight and leading to frustrated customers. Collecting was another grind. Trying to catch people at home and willing to pay was tough enough. Their flimsy excuses always trumped the impending deadline to pay my monthly bill. I was glad when I found other part-time work and gave up the route.

Moving away from home for college and marriage I became acquainted with a number of new papers. All were simpler reflecting the smaller towns that were home for a year, two, maybe three in that era. The smallest paper was a weekly in a town of about 1,500. We’d laugh at the rural simplicity. Weekend visitors from the big city of Portland, all of 75 miles away, would warrant a paragraph or two. For all the mocking we did, we continued with a mail subscription for a year or more after moving away.

We settled into Bellingham in 1979, and it is still our home. It is something of a “just right” place to live. Throughout the years we have taken the daily. With our local involvements we (myself, my wife and our two sons) have each individually and on some occasions collectively found our way into a story here and there over the years.

Similar to my parents, I “encouraged” my sons to be paper carriers (sounds like a disease). A route near our home was open and they could work together or trade off days. It would be a good learning experience for them both.
Let’s just say it was one of my overly optimistic moments and one son continued with the route. It was afternoon delivery for the five weekdays and an early morning delivery on the weekends. I’d get up early on weekends and we’d deliver the papers together. Afterwards we’d go to the neighborhood bakery for hot chocolate and old-fashioned donuts. On some days I’d let my son sleep and do the route by myself.
Late in the time our son had a route, the paper made the switch to all morning delivery. Kids as paper carries were soon a thing of the past and drivers now cover the routes. Looks like a slim chance my grandkids will ever deliver papers.

I think we are one of the few people on our street who still subscribe. By the time it gets here, around 6:00 a.m., I’ve long past read the real news. Yet I still enjoy holding the paper with its semi-rough feel and almost-but-not-quite-musty smell. I kind of like it when I notice smudges of ink on my fingers.
Then there is the content: looking for the local stuff, human interest stories, local sports with family names I recognize, business transitions, local history, the stuff with other community angles — and, of course the obits, again looking for people I know (two friends have passed away during the days I’ve been working on this). The ads and coupons are helpful for some of our shopping needs or habits.
I loved the comics growing up. Now I follow a few, but they seem to have a rapidly declining draw. This week’s Sunday paper came with news that they had switched providers and would be dropping five or six more of the regulars.
In what may be the proverbial last straw, we got a letter from the publisher this week informing us of a rate hike to pay for increased web-based services. My wife suggested we go to Sunday only. Maybe web only. Something’s gotta give.
Why have I continued to get a paper for so long? It’s a ritual and I like it. I realize a ritual for one may look ridiculous to another. But it’s my ritual and giving it up won’t be easy.
May God have mercy on us all.