The charity of art

also : https://www.catapultmagazine.com/theme-song/article/the-charity-of-art
Posted by jim schmotzer at 11:13 PM No comments:

August 1, 2012 will mark 15 years since my dad died, a few days after his sixty-sixth birthday. And it was too soon. He’d quit smoking about ten years earlier. But it wasn’t soon enough.
My dad was a complicated man. Our relationship was distant through my childhood and young adult years. For reasons I can’t explain, he seemed to soften in his last decade. To be clear, “soft” for him was a matter of soft compared to what he’d been before. He could shoot a look or a quick word that would leave almost anyone, from business associates to my young sons, wondering if he was joking or frightfully intimidating.
We gathered at the community center of the “senior” neighborhood for the service.  I said a few words, a prayer, and then we listened Neil Diamond songs on a borrowed boom box. Dad loved Neil.
Back at their home with Blanche, his second wife, we faced the distribution of his earthly possessions. My brother didn’t want much. I couldn’t let things go. Emotion drove me to bring home boxes that were soon in the far back of a closet. I don’t think I’ve looked through them in the intervening years. If my memory is correct, there are baby clothes, a wedding ring, a few trinkets, papers and pictures.
We also brought home his chair, a classic lounger, plush and overstuffed, the color of a young fawn. It rocked, it reclined and was great for watching TV or taking a nap. Soon it was in our family room, generally treated as mine, but I knew it was always his.
After a few years we purchased new furniture for the family room. I reluctantly agreed to let the chair move, but not leave our house. It went first to our living room and then upstairs to one our son’s rooms, now a guest room.
Time went on and the chair was rarely used, but there was still some sense of “having” it. Then about three years ago, our fourth grandchild, Kairi, entered the world. Sometime in her first year her mother mentioned she’d like a rocker for the nursery. An idea perked and we moved the chair the half-mile from our house to her room.
It was perfect. I loved the idea of her parents rocking her to sleep in my dad’s chair. When visiting, I’d sit with her and tell her stories of the great-grandfather she’d never know.
Soon Kairi became a chatting toddler.  She’d ask me, “Grandpa, want to see my toys?” which meant a trip to her room. In a few minutes she’d give me a run-through of her treasured possessions, we’d play hide-n-seek (she always hid in the closet), have a parade, maybe a tea party and then settle in the chair for stories.
The arrival of Kairi’s “big girl” bed pushed the chair to their living room. I like to think I’ve let it go, that I won’t need to bring it back home if they indicate they need the space or are done with it. I like to think a lot of things, and then reality sets in.
I live in a college town. I know the fate of unwanted furniture, sooner or later left by the curb with a quickly scribbled “I’m free” sign, eventually taken by students who will lounge the night away in various stages of inebriation playing video games before sleeping (still in the chair) through class the next morning.
A chair can last for years in this state. Soon no one remembers where it came from or who actually owns it. Roommates transition on a staggered timetable, adding to the confusion. The chair remains. Some day the slumlord will be stuck disposing of the chair while looking for new renters. They will probably put it on the curb with another paper sign before actually hauling it away.
A few days ago, in the late afternoon, I stopped by my son’s house under the guise of dropping off a jacket he’d left in my car, but really to see the grandkids. As I walked into the living room, there was Kairi, sitting in the chair with a blanket, toys and two of her “beebees,” which is her name for pacifiers.  She had one in her mouth and the other in her hand. Her hair was somewhat out of sorts and her cheeks were a bit flushed, the look she has after a good nap.
She glanced at me and mumbled something through her beebee. I told her I didn’t understand and her mom said, “Take out the beebee when you’re talking to grandpa.” She took it out and asked, “Can we go for a bus ride?” which warmed my heart. Riding the bus downtown to visit pet shops and get a snack is a bit of a grandpa ritual. I told her I was leaving town and we’d go as soon as we could upon my return. She said okay. I bet she’ll remember next time she sees me.
It’s easy to remember my Dad leaning back in the chair, full of life, laughing, waving his arms and telling another story with his mischievous smile and special mix of angst and biting humor. Along with that image, I now hold one of Kairi nested in the chair, just this side of her nap, surrounded by stuff she loves, stuff that signals security for her. The chair will soon enough be gone, but I’ll hold all of these memories as long as I can.
May God have mercy on us all. 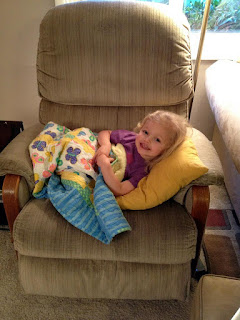 Posted by jim schmotzer at 4:32 AM No comments: