Ten Things For A Short Journey

Here is the opening and a link to a new piece I have in the current issue of Topology Magazine:


30 years ago we travelled a few miles across town. It was a relatively short distance, but a change of untold consequences. We were leaving a work setting where housing was part of the compensation and culture. It was not quite a commune (and hopefully not a cult). We had two young sons. We were a one-car family. We wanted to be near downtown and near my new place of work. We found an affordable fixer-upper, in an era of high interest rates.
We soon learned that the public school, about two blocks away, was the unofficial center of a tight knit neighborhood. Our new address put us in between the center of downtown and the interstate, about a mile from each. In the three decades we have lived here, we have raised our children, lived in two homes within a half-mile of each other and transitioned though a number of life and career shifts.
Bellingham has continued to morph and grow over the years. We have seen the loss of a major employer with the closing of the pulp mill. We have lived through the coming of a regional mall resulting in the near death and eventual rebirth of downtown. Bellingham may now have more brewpubs, coffee shops, and hipsters per capita than either Portland or Seattle can boast.
Here is the link for the rest of the essay: http://www.topologymagazine.org/essay/ten-things-for-a-short-journey/
Posted by jim schmotzer at 8:27 AM No comments:

Noisy Water is a new anthology of poems by Whatcom County poets. Here is my contribution:

Will runners be frozen on their second,
or possibly third loop on the backside of Padden?

Will the Lynden faithful be found
sitting, on rock-hard pews,
attempting to appear deeply interested
in yet another droning preacher?

Will Lummi kids be caught forever playing chase
on the banks of the Nooksack?

Will cars be perpetually jammed at
border crossings in Blaine, Lynden and Sumas?

Will newborn calves be calcified suckling
their mother’s teats on farms around the county?

Will the neo-punk, quasi-hippie, post-grunge,
sort of goth street kids be forever huddled
on the corner of Railroad and Magnolia,
bantering with the spandex-clad city cops
astride their requisite bikes?

I wonder.
Will it be like Pompeii
when Baker finally blows? 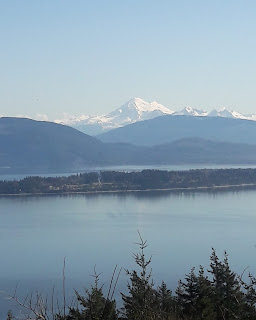